Are you from the EU regions?

Virus Outbreak: Taiwan to become world No. 2 in mask production 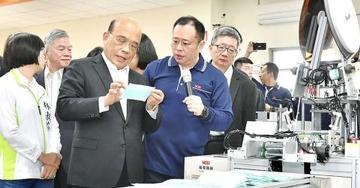 Due to added production lines, the nation is poised to become second in the world in terms of mask production, Premier Su Tseng-chang said.
Su made the remarks while inspecting mask manufacturing facilities at Nonwoven Converting Machinery Co in New Taipei City in February.
Thanks to the efforts of the Ministry of Economic Affairs, the nation is set to finish adding 60 mask production lines to its current production capacity in March, Su said.
The nation would be able to produce about 10 million masks per day, he said.
Disease prevention is a joint effort, Su said, thanking the company and the Taiwan Machine Tool and Accessory Builders’ Association for helping to boost mask production amid an outbreak of COVID-19 in China.
He also thanked pharmacists for cooperating with the government’s mask rationing policy and for maintaining order when people line up to buy masks, as well as postal workers for delivering masks to every corner of the nation.
All of these efforts have enabled prices to be capped at an affordable NT$5 (US$0.165) per mask and kept the number of confirmed cases low, compared with neighboring countries, Su said, adding that the nation’s tenacity has shone through under such harsh conditions.
Source: Taipei Times
Nina Lin (ninalin@taitra.org.tw)